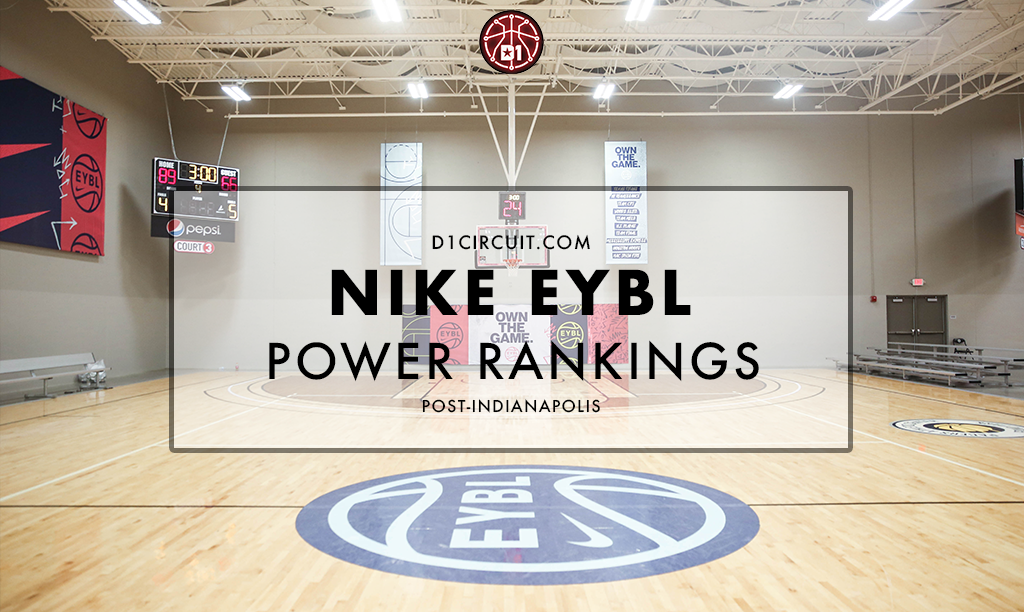 The EYBL Power 10 rankings have been updated through four games, and six programs were able to maintain their top ten ranking heading into Indianapolis.

Check out the full rankings below, and check back Friday evening for exclusive coverage of the 17U Nike EYBL. 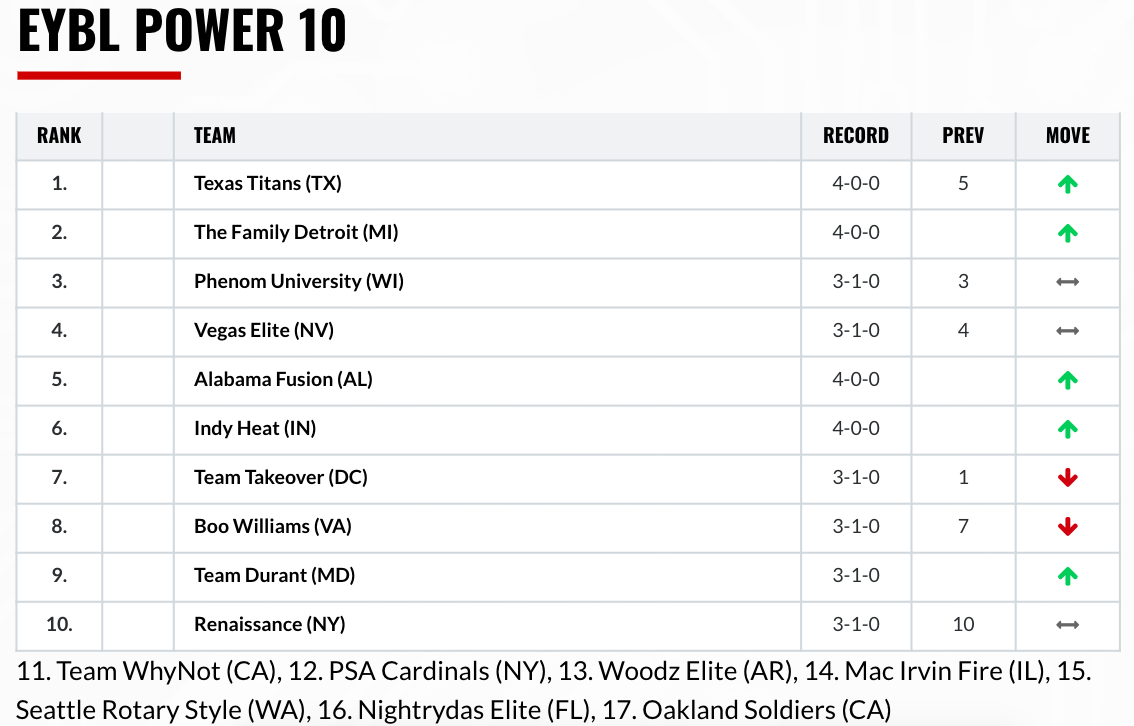 The Texas Titans got off to a lightning-fast start in Atlanta, compiling a 4-0 record behind Session 1 Most Valuable Performer Cade Cunningham. The Titans dispatched defending E16 champion Woodz Elite (3-1) before taking out No. 3 Phenom University (3-1) to close out the first session. Junior 5-star big man Greg Brown III earned 2nd-Team All-Atlanta honors, and if he continues to produce at this level, he and Cunningham become arguably the most dangerous duo in the league. Mike Miles, Rondel Walker, and JaKobe Coles both enjoyed rock-solid opening sessions, and head coach Greg Gober will be relying on his do-it-all juniors to continually adapt to their roles. The Titans' lineup doesn't have any noticeable flaws, and with the star power at the top, they should remain a Peach Jam favorite throughout the regular season. The Titans will only face one team with a winning record during their four-game slate in Indianapolis.

The Family Detroit (MI) makes the biggest jump in the rankings after an eye-opening first session. Detroit's EYBL affiliate features six circuit veterans, and that experience paid off in a big way in Atlanta. Junior Scooby Johnson earned 2nd-Team All-Atlanta honors while Michigan State commit Jalen Terry was an All-Atlanta honorable mention selection. Head coach Courtney Williams has his team practicing hard, and they'll be motivated by the opportunity of getting 'The Family' off to the best 8-game start in EYBL program history. In Indianapolis, they will add junior point guard Lorne Bowman II to the rotation. A 6-foot-2 combo guard committed to Wisconsin, Bowman should be an instant-impact player alongside Terry.

Phenom University had a very anti-climactic 17-and-under EYBL program debut, winning their opening by forfeit as Team Melo suffered some unfortunate travel issues. Undeterred, Phenom excelled in their next two games, highlighted by a 17-point blowout win against a loaded PSA Cardinals squad thanks to standout performances from EYBL Atlanta Honorable Mention selections Jaemyn Brakefield and Jalen Johnson. Phenom wasn't able to handle 36-minutes of the Texas Titans, but it's hard to hold that loss against them as the score wasn't an indication of how well Phenom played against the league's top unit. Head coach Antonio Curro has his sights set on a 4-0 showing in Indianapolis, and their schedule is more than favorable; all four Indy opponents are at or below a .500 record.

Vegas Elite utterly dominated 2019 EYBL competition through three games, averaging 107 points per game, including setting the single-game circuit scoring record in their 130-72 session-opening win over Playaz Club. They suffered a session-concluding nail-biting loss to Team Final, a game marred by injuries and foul trouble for both teams. Josh Christopher earned 1st-Team All-Atlanta honors while Jaden Hardy scored an All-Underclassman selection. Junior Gonzaga commit Julian Strawther was just as impressive as his star teammates, and the trio should continue to wreak havoc on the division. Also worth nothing - Indianapolis will see Vegas Elite gain the services of top 50 big man Mady Sissoko. The addition of Sissoko fills up any holes that Vegas Elite had in their rotation, and makes them one of the most formidable teams in the country.

The Alabama Fusion turned in a terrific E16 showing during 2018 season, ultimately obtaining an automatic bid to this season's circuit. Even after last year's success, there were unanswered questions as to whether or not the Fusion would have what it takes to compete at the 17-and-under level.

The Indy Heat is on the shortlist for 'biggest surprise' in Atlanta, but after a deeper look at their rotation, no one should be shocked at their first session success. The Heat was No. 1 in offensive efficiency in Atlanta, riding the red-hot play of underrated juniors Justin Powell, Nijel Pack, and Jaden Ivey. The Heat only play eight players, but their lack of depth allowed them to develop a consistent rhythm within their rotation. The Heat won their opener by 48 points and closed out the session with a pair of close wins over No. 8 Boo Williams (+2) and the New York Lightning (+6). Head coach Jason Delaney and company will look to defend home turf during the second session at the Pacers Athletic Fieldhouse, as the Heat will be looking to build on last season's 4-0 showing at home.

*On Wednesday, May 9, junior big man John Hugley (247 4-star) announced he would be joining the Indy Heat for the remainder of the Nike EYBL season.

Team Takeover rolled to a 3-0 start in Atlanta, dropping their final game in a regional rivalry against an upstart Team Durant program. The game was nip-and-tuck throughout, but the loss definitely displayed a defensive deficiency that will need to be addressed very quickly by head coach Keith Stevens. Typically, Team Takeover 17U squads take a bit to hit their stride, and we expect nothing different from this version. Team Takeover has a ton of talent at their disposal, and it will undoubtedly take some time to figure out ideal roles within their rotation. Takeover will face off against No. 8 Boo Williams in Indianapolis, and the outcome of that matchup should be telling about Takeover's long-term goals.

Boo Williams lived up to the hype in Atlanta, accumulating a 3-1 record behind the play of 3rd-Team All-Atlanta performer Cam Thomas. Aside from a narrow 2-point loss to No. 6 Indy Heat, Boo won their other three matchups by an average of 14 points per game. Sophomores Zion Harmon, Aminu Mohammed, and JT Thor were impressive in Atlanta, as was 7-foot-1 junior big man Mark Williams. Top-to-bottom, Virginia's EYBL affiliate has all the makings of a true Peach Jam Championship contender. In Indianapolis, it will be put up or shut up, as Boo faces off against No. 7 Team Takeover (3-1), No. 9 Team Durant (3-1), and a loaded Oakland Soldiers (2-2) squad.

Team Durant just missed out on being ranked in the preseason, and they used Atlanta's session to make us look dumb. After a session-opening loss to No. 5 Alabama Fusion, Durant found their stride. They picked up a Saturday morning win over the Oakland Soldiers, blew out All Ohio Red, then closed out the session with a massive statement win over No. 1 Team Takeover. Junior guards Earl Timberlake (Honorable Mention, Best Dunk) Ishmael Leggett (Atlanta All-Breakout Team) were sensational in Atlanta, and if Durant can implement a now-healthy Ace Baldwin into the rotation alongside them and junior Darius Maddox, they become a very confusing riddle to solve for the opposition. Just as important as their backcourt production is the continued output from their underrated frontcourt. Junior big men Tegra Izay (4.8 PPG, 6.0 RPG), Paul Smith (6.2 PPG, 2.3 RPG), and Caleb Dorsey (6.8 PPG, 3.5 RPG) showed flashes in Atlanta, and all three will play huge minutes moving forward. Durant will continue to get tested in Atlanta, highlighted by matchups against No. 8 Boo Williams (3-1) and Team WhyNot (3-1).

The New York Renaissance held firm at No. 10 after an impressive finish to the opening session. The Rens lost a buzzer-beater to PSA in the season opener, but there was no sulking or complaining to be had. Instead, head coach Andy Borman and company took out their frustrations on their next three opponents. Led by 1st-Team All-Atlanta performer RJ Davis, the Rens out-toughed Team Final 69-60, thoroughly man-handled Team CP3 by 38 points and closed out the session with a hard-fought five-point win over RJ Hampton and Drive Nation. Sophomore Honorable Mention selection Jonathan Kuminga was a treat to watch, as was sophomore big man Adama Sanogo, and the OSNA (NY) teammates should continually improve alongside a talent-drenched Rens squad. If they can get improved scoring production from junior veterans Nate Tabor and Ethan Morton, this team will be a major headache moving forward. They will be heavily-tested in Indianapolis, highlighted by matchups against high-scoring foes Mac Irvin Fire (3-1) and No. 4 Vegas Elite (3-1).

View All | RSS
Tweets by @D1Circuit